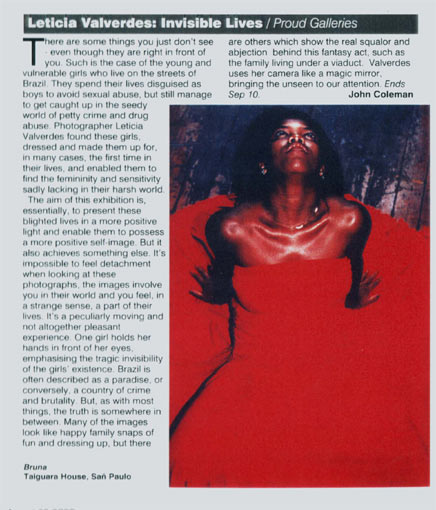 There are some things you just don’t see even though they are right in front of you. Such is the case of the young and vulnerable girls who live on the streets of Brazil. They spend their lives disguised as boys to avoid sexual abuse, but still manage to get caught up in the seedy world of petty crime and drug abuse.

Photographer Leticia Valverdes found these girls dressed and made up for, in many cases, the first time in their lives, and enabled them to find their femininity and sensitivity sadly lacking in their harsh world.

The aim of this exhibition is essentially, to present these blighted lives in a more positive light and enable them to process a more positive self image. But it also achieves something else. It’s impossible to feel detachment when looking at these photographs, the images involve you I their world and you feel, in a strange sense, a part of their lives. It’s a peculiarly moving and not altogether pleasant experience. One girl holds her hands in front of her eyes, emphasising the tragic invisibility of the girls’ existence. Brazil is often described as a paradise, or conversely, a country of crime and brutality. But, as with most of things, the truth is somewhere in between. Many of the images look like happy family snaps of fun and dressing up, but there are others which show the real squalor and abjection behind this fantasy act, such as the family living under a viaduct. Valverdes uses her camera like a magic mirror, bringing the unseen to our attention.