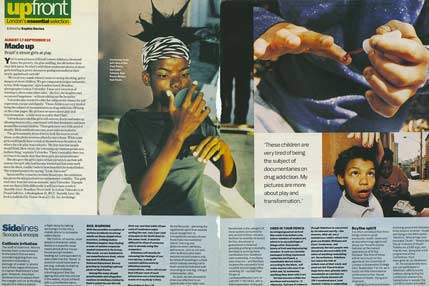 You’ve seen pictures of Brazil’s street children a thousand times: the poverty, the glue-sniffing, the old-before-their-time little faces. So what’s with these exuberant photos of street girls twirling in pretty dresses or gazing astounded at the newly applied nail varnish?

“We’re all very numb when it comes to seeing shocking, gritty images of street children. We get compassion fatigue and prefer to buy Hello! Magazine,” says London-based, Brazilian photographer Leticia Valverdes. “I was very conscious of wanting to show some other sides-the love, the laughter and the occasional happiness-without editing out the brutality”.

Valverdes also wanted to offer her subjects the chance for self-expression, escape and dignity. “These children are very tired of being the subject of documentaries on drug addiction. Of being on the crime pages. My pictures are more about play and transformation-a little twist in reality that I find”.

Valverdes provided the girls with mirrors, frocks and make-up, allowing them to relax, experiment with their femininity and mess around like normal children. ”The girls have very little proof of identity. Birth certificates are rare, as are mirrors or photos”.

The girls normally dress down to look like boys to avoid abuse, so the photo sessions offered a rare release. While some girls could hardly bear to look at themselves in the mirror, for others the role-play was cathartic. “My fear was that people would think: How sweet, she’s dressing up common people as a fashion thing”, explains Valverdes. “There’s sexuality there too, so it has to be made clear that these girls are not prostitutes”.

She also gave the girls copies of their pictures to up their self-esteem. One girl, who had become wasted and lost some of teeth since the shoot, couldn’t believe how beautiful she looked before. “She stopped passers-by saying, ‘Look, this is me!’”