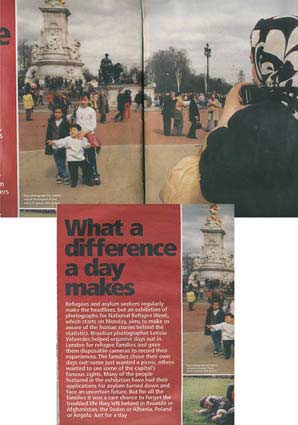 What a difference a day makes

Refugees and Asylum seekers regularly make the headlines, but an exhibition of photographs for National Refugee Week, which starts on Monday, aims to make us aware of the human stories behind the statistics, Brazilian photographer Leticia Valverdes helped organize days out in London for refugees families and gave them disposable cameras to record their experiences. The families chose their own days out: some just wanted a picnic, others wanted to see some of the capital’s famous sights. Many of the people featured in the exhibition have had their applications for asylum turned down and face uncertain future. But for all the families it was a rare chance to forget the troubled life they left behind in Rwanda or Afghanistan, the Sudan or Albania, Poland or Angola. Just for a day. (Their photos and Leticia’s will be showing at the Riverside Studios)